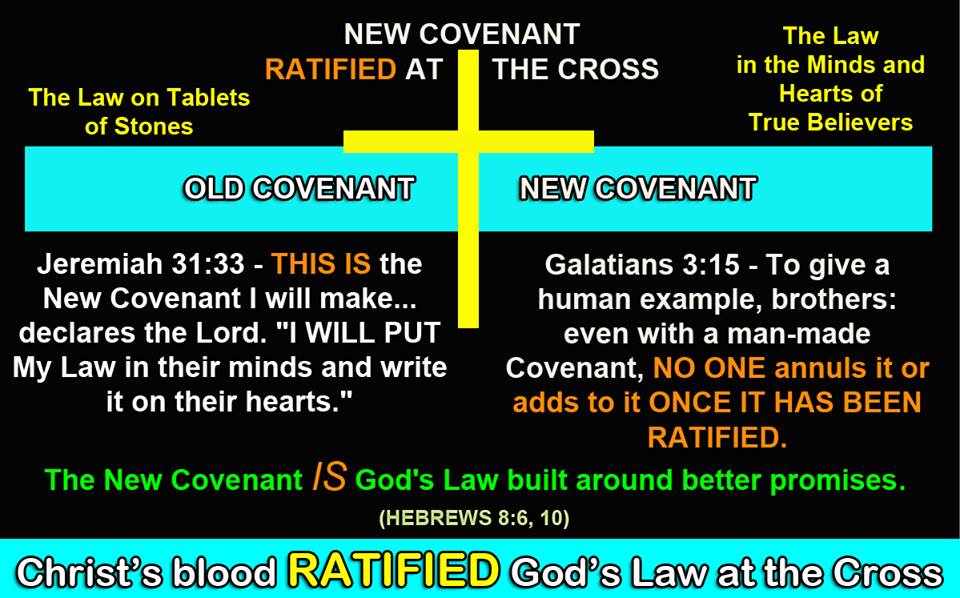 A Covenant is nothing more than a binding agreement between two or more parties. A mutual contract, if you will. In this case, between God and His people – you and me!

And God’s Law- or Commandments, are at the heart and core of this New Covenant. It is, after all, the very thing being Covenanted- or what was being agreed on TO BE OBEYED.

The following is the original Covenant that Christ re-implemented at the cross with His shed blood:

Exodus 24:7 – Then he took the Book of the Covenant, in which the LORD’s COMMANDMENTS WERE WRITTEN, and read it (the Commandments) aloud to the people. They said, “WE WILL OBEY THE LORD AND DO EVERYTHING THAT HE HAS COMMANDED.”

Exodus 24:8 – Then Moses took the blood in the bowls and threw it on the people. He said, “This is the blood that Seals the Covenant which the LORD made with you WHEN HE GAVE ALL THESE COMMANDMENTS.”

So, aside from the inclusion of better promises (which is what actually makes it “new”-or a newer version), at its core is THE VERY SAME LAW that the First, or Old Covenant, was comprised of- God’s Eternal Law.

The term “New Covenant”, doesn’t imply a Christian way of life in a new era, that only includes a relationship with Christ, love, and grace, …AND EXCLUDES God, God’s Holy Law, or any works of righteousness.

If this is what you think, you are sadly mistaken. That sounds more like a script perpetrated by Satan.

No! We have the New Covenant BECAUSE of God’s Law. READ IT FOR YOURSELF:

Hebrews 8:6 – …The New Covenant is established on better promises.

Hebrews 8:10 – THIS IS the Covenant I will establish… declares the Lord. I WILL PUT MY LAWS IN THEIR MINDS AND WRITE THEM ON THEIR HEARTS. I will be their God, and they will be my people.

God’s Eternal Law, and the agreement to OBEY it, is the fabric of the New Covenant. THAT’S WHAT IT IS!

All God did, was take the VERY SAME AGREEMENT and updated it with new and better promises.

And to make this “NEW” Covenant or Agreement (in regards to God’s Law and our obligation to obey it) LEGAL AND BINDING, Christ had to shed his blood to ratify and make it so.

And by doing so, The New Covenant- with God’s Eternal Law at its core- was initiated and launched at the cross. After ratification, NO ONE can change, alter, or modify it in any way (Gal 3:15).

So tell me, HOW DOES IT MAKE ANY SENSE AT ALL, as some believe- that Christ came to abolish the Law- or any portions thereof, at the Cross (or in this New Covenant era)- when He was actually required to shed His Holy Blood on that very Cross to accomplish the diametrical opposite of said belief?

And even the thought of that notion is so outrageous! Don’t these people see the screaming contradiction???

Clearly, God’s Law was re-ratified at the cross, by the shedding of Christ’s blood.

Therefore, any arguments that anyone has… that diminish God’s Law in any way, shape, or form… or that would free us even slightly from our obligation to keep any portion of God’s Law, are spurious and dead on arrival.