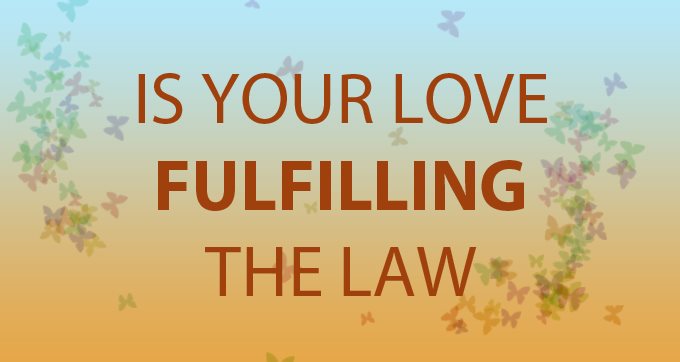 Is Your Love Fulfilling The Law?

What does it mean for all of  us, when the bible says that, Love, Fulfills the Law?

Does it mean that we no longer have to worry about keeping God’s OTHER commandments anymore- much less, make an effort in trying to keep them… just as long as we Love God- and love our neighbors as ourselves?

Is that what the bible is implying and really saying? That as long as we love God and our neighbors, we’re no longer obligated to keep God’s Law?

Just so that you know, you can’t separate God’s Commandments from God’s Love- or vise-versa! It’s just impossible to have one without the other and then still call it the Love of God.

If you have two people that come up and Person One says, I love God and my fellow humans, so I don’t worry about the Law or trying to keep it, because, the bible says that Love, Fulfills the Law. So, just by Loving, I’m already fulfilling the whole Law.

And then, Person Two says, I love God and though I’m not perfect, I try to keep His Commandments to the best of my abilities as He commanded that we do, because, I Love Him and my fellow humans.

So, of the two, whose Love is actually Fulfilling the Law?

The Love of Person One, whose Love ISN’T accompanied by any efforts or works of Commandment keeping as God commanded?

Or, the Love of Person Two, whose Love actually shows the fruits of the Spirit in his obedience and servitude to His God, His Laws, and Commandments, by doing everything he can to keep them- even though, he knows that he’s not perfect?

Let’s let God’s Word show us which is the actual Love that Fulfills the Law:

1 John 5:2 – By this we know that we love the children of God, when we love God and keep His commandments.

There you have it! The true Love of God- the one that Fulfills the Law- is the one that is accompanied by commandment keeping and a desire to obey them.

So, WHAT IS Love- the TRUE biblical Love?

2 John 1:6 – This is love, that we walk according to His commandments. (NKJV)

Christ said that these two Love Commandments, were the two “MOST IMPORTANT”- NOT THE ONLY – Commandments of the Law. (Matthew 22:36-40) (NLT)

Here’s what He said about the other, LESS IMPORTANT Commandments of the Law:

So, Christ commands us to also “PRACTICE AND TEACH” the least important of God’s Commandments!

Are you, as a Christian, deliberately practicing them and teaching that we are indeed, obligated to keep God’s Law? Or, are you teaching a form of lawlessness as most of modern-day, so-called, Christians do?

Is your love fulfilling the Law?

Only YOU can honestly answer these questions- God, however, already knows the truth.

THE MOST PARAMOUNT teaching EVER, of the Commandments of Jesus is this:

Did you get that?

Yes! God’s gift of Eternal Life is free! But, just like all of His other promises and blessings, it isn’t going to be given to those who practice lawlessness- which, are the very ones who have a complete disregard for His Law, even if they do call themselves “Christians”.

As a matter of fact, God even abhors the prayer of one who has abandoned His Law. To Him, that prayer is an abomination.

Proverbs 28:9 – God detests the prayers of a person who ignores the Law. (NLT)

No! The Lake of Fire is the reward of the lawless! On the other hand, God’s promises and blessings, will be bestowed on His true children, those who LOVE and OBEY Him.

So, let’s do as Christ commanded, Love God and Love our neighbors as ourselves… but also, as He stated, practice and teach God’s OTHER Commandments like keeping Saturday, the Seventh-Day Sabbath- instead of Sunday- the first day of the week, keeping His Holy Days instead of pagan holidays, and abstaining from eating unclean animals which will defile us, and therefore, render us unholy… meaning, that the Holy Spirit can’t live within us, because it can’t live in a defiled house.

Let’s let our Love TRULY Fulfill the Law! For, that indeed, is the true Biblical Love.