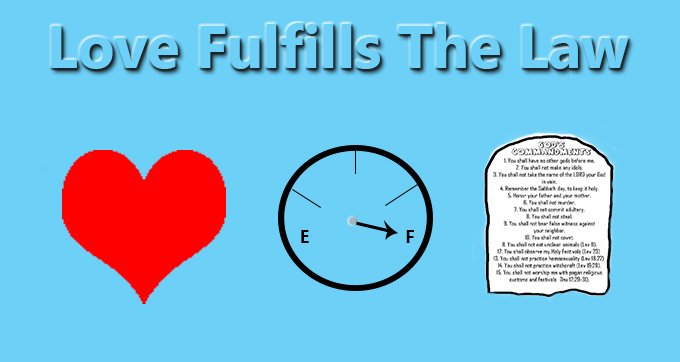 Why should anyone be surprised at a concept that says, love fulfills the law?

After all, that’s what it’s all about!

If you love God, you will obey all of the commandments pertaining to God- like having no other gods before Him, not making and bowing down to any carved or graven images (Exodus 20:3-6), keeping His Sabbath Day Holy by doing no work and coming together to worship Him ON THAT day (Lev. 23:3), not eating any unclean animals so that one can’t be considered defiled and unholy (Lev 11:43-45), etc…

This is what Paul meant when he says that Love fulfills the Law (Rom 13:8-10). Because it really does! That’s why Paul says that OBEYING God’s Law is what actually matters:

So then, one can’t say that they love God AND NOT keep his law, otherwise, how could it be said that they are fulfilling, keeping, or establishing the Law?

What this would only prove is that they really don’t love God.

So inversely, it could just as well be said, that if we DON’T OBEY (keep) His commandments, then we DON’T love Him. That’s HIS definition of love. It’s a two-way street.

And talking about a two-way street, YES! Most definitely it’s about a relationship with God!

Knowing ABOUT God, IS NOT the same as KNOWING God. And in order to have a thriving and genuine relationship with God, you have to truly know Him. Otherwise, how would you know HOW to worship and obey Him?

There’s not a single person I’ve ever met in my entire life that doesn’t know ABOUT God- whether that person is religious or not. But very few, and that includes professing Christians, truly KNOW God.

There’s a great example in the Bible in regards to some “preconceived” notions of some “religious” people who actually “thought” they had a solid, two-way relationship with Christ, until the very end, when they’ll be crushed and astonished, when they are told by Christ, to get lost because he doesn’t even know them.

In Christ’s own words:

Mat 7:21 – “NOT EVERYONE who calls out to Me, ‘Lord! Lord!’ will enter the Kingdom of Heaven. Only those WHO ACTUALLY DO “THE WILL OF MY FATHER” in heaven will enter.

Verse 22, makes abundantly clear the “assumed” two-way relationship. But in verse 23, Christ clarifies that in spite of how strong they might have felt, or how real it may have seemed to them, it had actually been a ONE-WAY relationship all along, up to the very end.

Hopefully, this WARNING resonates with some of you.

It’s not only a relationship with Christ that one must have, but ALSO with God, the Father (remember, He sacrificed His Son for YOU). Scripture makes this abundantly clear.

Again, in Christ’s own words:

John 4:23 – Yet a time is coming and has NOW come when the TRUE WORSHIPERS will worship THE FATHER in spirit AND TRUTH, for THEY ARE the kind of worshipers the Father SEEKS.

Christ came to do His Father’s will, not to replace it with His own:

John 6:38 – For I have come down from heaven not to do my will but to do the will of him who sent me.

Mat 12:50 – For whoever does the will of my Father in heaven is my brother and sister and mother.”

Joh 5:30 – I can of mine own self do nothing: as I hear, I judge: and my judgment is just; because I seek not mine own will, but the will of the Father which hath sent me.

Jesus calls it, doing “The Will Of My Father”.

He says, IF you love Me, KEEP my commandments (John 14:15). This is the concept of how Love Fulfills The Law.