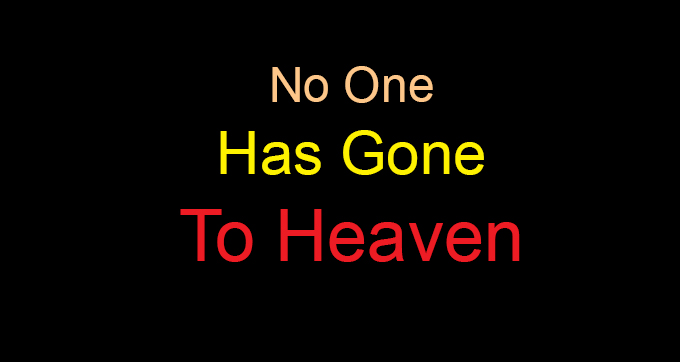 There are many ways to prove scripturally, beyond a shadow of a doubt, that a man IS NOT immortal, and therefore, DOES NOT go to heaven, or hell, when he dies an earthly death. No One Has Gone to Heaven- at least not yet.

I know of many verses, but one of my favorite ones is this very simple one:

That, in itself, should suffice for any reasonable thinking person. It’s only a matter of using the Law of Non-Contradiction. But of course, when it comes to these matters, people don’t want to think rationally. They no longer look to the bible for truth, but instead, for ways to justify their beliefs at any cost regardless of the scriptural chaos, conflicts, and contradictions left in the wake of their stance.

But there is another scripture that I also like very much and proves without a shadow of a doubt that NO MAN has ever gone to heaven. It literally spells it out in EXPLICIT fashion and leaves absolutely nothing to be implied:

John 3:13 – “NO ONE has ascended to heaven BUT HE who came down from heaven, that is, the Son of Man WHO IS in heaven.”

NOTICE VERY CAREFULLY what this verse is actually saying. Look beneath the surface and dissect it! Mentally ingest it!

It’s no secret that John wrote the Gospel of John sometime AFTER the death and resurrection of Christ. So PLEASE NOTICE how John 3:13 reflects this by indicating, “WHO IS” (present-tense) in heaven!

So when John wrote his gospel, Christ HAD ALREADY resurrected to heaven. But in the same sentence of this verse NOTICE that John makes it very clear that aside from Christ BEING in Heaven, NO ONE ELSE has EVER gone there!

READ IT AGAIN! That is a very clear and profound statement.

This verse destroys all of the ambiguous proof-texts submitted by those who are of the immortal soul persuasion.

The bible is EXPLICIT, God ALONE is immortal and NO ONE aside from Christ, HAS EVER gone to heaven.

So that means that at their deaths, neither Enoch, Elijah, Moses or any other person for that matter, has ever ascended into heaven where God dwells. And no, neither did anyone else at the time of Christ’s resurrection, not even the thief on the cross.