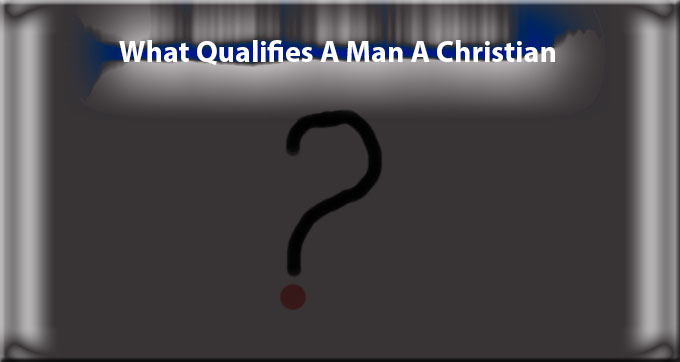 What qualifies a man a Christian?

Is it accepting Christ and then living by his own, personal faith, which has been fashioned out by his own personal views- or his Church’s- even if most of them are based outside of the biblical realm- like Sunday sanctification and eating unclean animals for starters? And then, just having faith that, THAT FAITH, will be fine and dandy and acceptable to God?

Or- is it accepting Christ, and then embracing and living by God’s Commandments and instructions, and then having faith ON THAT- rather than on his own custom-made faith?

Brethren, the standards set in God’s Word is what qualifies a man a Christian.

One can’t be a legit Christian without accepting the terms of the New Covenant of Jesus Christ, which was fashioned by God the Father. If you reject the terms of this EVERLASTING agreement (Hebr 13:20), you are voluntarily breaking this Covenant and choosing not to be a participant in everything it espouses.

Simply stated, anyone can call themselves a Christian and still not live according to the Will of God. In order to qualify as a Christian, you have to be a willing participant and follow the guidelines set forth by God’s word- the Bible. For in it, we are set on the right path, or warned, if we are straying off of it.

It’s an ASTONISHING thing to behold, when the multitudes professing Christianity, literally shun the terms of the New Covenant (which is agreeing to obey all of God’s Law) BY CLAIMING GRACE through a LOVE relationship with Christ.

Because, in breaking God’s Law in this manner, they trample the Son of God underfoot by perpetually crucifying Him for their ongoing sin, treat His blood which ratified the New Covenant as an unholy thing, and literally INSULT the Spirit of Grace (Hebr 10:28-29). Which, ironically, is the very thing they are standing on as justification to circumvent the New Covenant.

Every public/private/military organization, workplace, church, etc…, has a set of rules, laws, or beliefs, for every member to abide by. And so it is with God and His Kingdom.

When it comes to serving God, it’s no different. You have to ignore the ways of the world (YOUR WAYS) and abide by God’s ONLY. You have to follow the rules:

2 Timothy 2:3 – Endure hardship with us like a good Soldier of Christ Jesus.
2 Timothy 2:4 – No one serving as a soldier (of God) gets involved in civilian (Worldly) affairs; rather, they try to please their Commanding Officer (GOD).
2 Timothy 2:5 – SIMILARLY, anyone who competes as an athlete DOES NOT RECEIVE THE VICTOR’S CROWN EXCEPT BY COMPETING “ACCORDING TO THE RULES”.

2 Timothy 2:7 – Reflect on what I am saying, for the Lord will give you insight into all this.