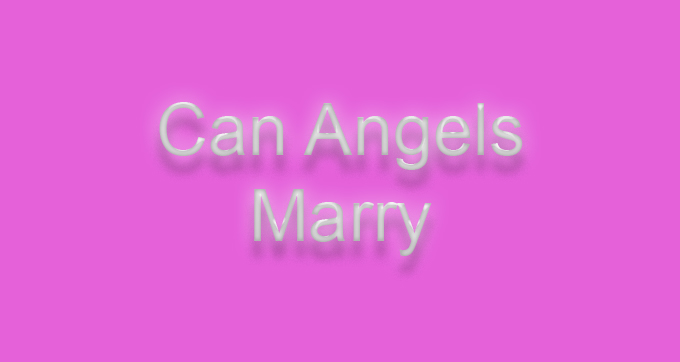 It is claimed that the Book of Enoch, was not permitted in the biblical canon due to the referencing of angelic beings coming down to earth and marrying the daughters of men.

So the question is this, Can Angels Marry?

In Genesis chapter 6, there is reference to angels having taken daughters of men as wives:

Genesis 6:1 – When man began to multiply on the face of the land and daughters were born to them,

Genesis 6:2 – the sons of God saw that the daughters of man were attractive. And they took as their wives any they chose.

The phrase, “sons of God”, is in reference to angelic beings.

Nowhere in Genesis, is Adam ever referred to as, “the son of God”, and he was the first human ever created.

These angelic beings no doubt, were the fallen ones. The ones who left their first abode, or dwelling place, and went after strange flesh and sexual perversions:

Jude 1:6 – Remember the angels who did not stay within the limits of their proper authority, but abandoned their own dwelling place: they are bound with eternal chains in the darkness below, where God is keeping them for that great Day on which they will be condemned.

Jude 1:7 – Remember Sodom and Gomorrah, and the nearby towns, whose people acted as those angels did and indulged in sexual immorality and perversion: they suffer the punishment of eternal fire as a plain warning to all. (Good News Bible)

Sodom and Gomorrah and the cities about them, acted in like manner (Like the Fallen Angels) indulging in sexual immorality and perversion, and are now set forth as an example to these sinning angels as to what type of punishment awaits them.

The people of Sodom and Gomorrah fornicated with strange flesh, man with man, and woman with woman. And probably, were engaging in bestiality as well. They engaged in unnatural and deviant sexual activity not condoned by the Almighty.

And so did the angels when going after strange flesh by taking daughters of men as their wives and mating with them. This abnormal junction, or union, between a spiritual being and a fleshy, mortal woman (strange flesh), resulted in a hybrid breed of giants and super humans called the Nephilim.

Genesis 6:4 – The Nephilim were on the earth in those days, and also afterward, when the sons of God came in to the daughters of man and they bore children to them. These were the mighty men who were of old, the men of renown.

The above verse tells us that the Nephilim were on the earth in those days (of Genesis 6:1-2) when this unnatural union between angels and women, was initially occurring.

History tells us that “the mighty men of old, men of renown”, are none other than the mythical heroes like, Achilles and Hercules, who were hybrids, half human and half god.

In those days it was believed that gods and goddesses would mate with humans and produce these super-strength heroes who now live in the pages of history as having accomplished unbelievable feats. That is what I call renown!

The people of ancient times, no doubt, equated these angelic beings to gods. And so classical mythology is full of these unions between gods and mortals.

So it appears that the question, Can Angels Marry, has already been answered in the pages of history’s past.

But I know, I know…  Some will quickly exclaim that angels can’t marry and will offer the following so-called evidence:

Matthew 22:30 – For in the resurrection they neither marry nor are given in marriage, but are as the angels of God in Heaven.

This, my friends, proves nothing!

This doesn’t say angels aren’t capable of marrying or reproducing. It only tells us that IN HEAVEN, they don’t. But here on the earth, it appears to be a totally different matter. We marry and reproduce here on earth- but in the resurrection (Heaven), neither humans or angels, are permitted to do so.

So, is it possible that the Fallen Angels who left their first abode (Heaven) and came to earth, were able to marry and reproduce here on earth- something they couldn’t do in Heaven because God forbade it?

Certainly! The scriptural evidence produced earlier suggests that Angels Can Marry, did, produced offspring with women, and will be punished for it.

Paul has an interesting thing to say in regards to man, angels, and women:

1 Corinthians 11:10 – On account of the angels, then, a woman should have a covering over her head to show that she is under her husband’s authority. (Good News Bible)

Why would a woman have to show the angels- or the “sons of God”, that she’s under her husband’s authority? It’s almost like attempting to demonstrate to them that she is married and already taken, and therefore, unavailable.

Another interesting thing to ponder on, is the fact that God himself implies that Satan, (representing the fallen angels), would have offspring with women and possibly having started with Eve, in the Garden of Eden.

Genesis 3:15 – I will put enmity between you (Satan-the serpent) and the woman (Eve), and between your offspring and her offspring…

So, the Nephilim, from the union of fallen angelic beings (Sons of God) and mortals, would always be at war with the lineage of full-blooded mortals.

So, Can Angels Marry?

While certainly not permitted in heaven, the bible hints at the notion that at one time, they did- at least here on the earth.

Remember the story of Sodom and Gomorrah, when two angels appearing as men- were in Lot’s house?

And how the men of the city were demanding the two to come out so they could have sex with them. And Lot, instead, offered his own two virgin daughters to them so that they wouldn’t sexually defile these angelic beings.

The angels finally blinded them and ended their abhorrent intentions. You can read the incident in Genesis 19:1-11.

After all, they eat, drink, walk and talk among men as men! And Lot knew this…, that it was possible for the mob to sexually defile them. So he offered up his own daughters instead.