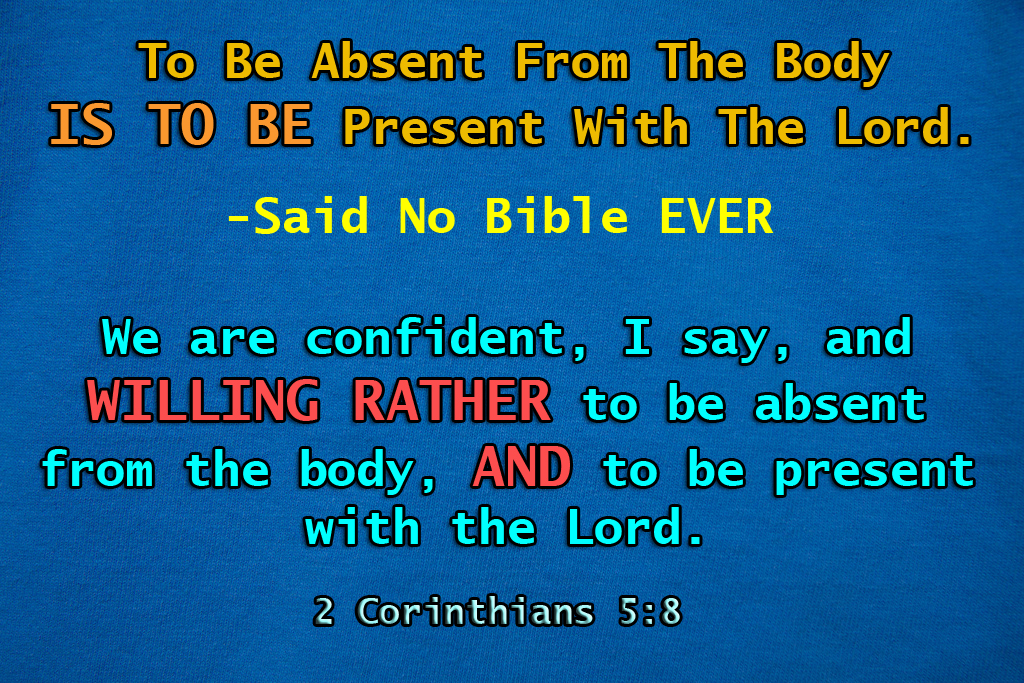 “To Be Absent From the Body is to be Present With the Lord” – Said No Bible EVER!

There isn’t a single bible verse about being absent from the body- in some separate, conscious, bodiless form- and being present with the Lord.

But between the transition from the earthly, mortal house, to the heavenly, immortal house, there is a middle stage where we aren’t clothed with neither a mortal house or a immortal house. There’s nothing at all! And there’s no going around it. Paul referenced it as being naked, or unclothed (2 Cor 5:3-4), meaning, being without a natural or spiritual house… which is a reference to the condition of DEATH.

And that is the part that is conveniently ignored by the confused- the immortal soul advocates, who claim that when we die, we go immediately to heaven (or hell), without interruption of consciousness. That’s not true!

Paul nowhere implies that we will arrive in heaven without a body; but rather, that we will not have this present body.

Here’s what he really said:

2 Cor 5:1 – For we know that if our earthly house of this tabernacle were dissolved, we have a building of God, an house not made with hands, eternal in the heavens.
2 Cor 5:2 – For in this we groan, earnestly desiring to be clothed upon with our house which is from heaven:
2 Cor 5:3 – If so be that being clothed we shall not be found naked.
2 Cor 5:4 – For we that are in this tabernacle do groan, being burdened: not for that we would be unclothed, but clothed upon, that mortality might be swallowed up of life.
2 Cor 5:5 – Now he that hath wrought us for the selfsame thing is God, who also hath given unto us the earnest of the Spirit.
2 Cor 5:6 – Therefore we are always confident, knowing that, whilst we are at home in the body, we are absent from the Lord:
2 Cor 5:7 – (For we walk by faith, not by sight:)
2 Cor 5:8 – We are confident, I say, and willing rather to be absent from the body, and to be present with the Lord.
2 Cor 5:9 – Wherefore we labour, that, whether present or absent, we may be accepted of him.

All that Paul was really saying is that we are confident of our future, eternal dwelling. And therefore, that he preferred, or was willing rather, at that moment in time, to be absent from our temporary, earthly bodies, and be present with the Lord in our glorified heavenly bodies, without having to die first, and find ourselves unclothed, naked, and void of life.

In other words, he was willing instead, to be absent from this mortal life, and already be present with the Lord in our heavenly, immortal life.

Nothing of a mystery there! I’m sure we’d all prefer to be clothed with immortality now, and be with Christ in heaven now, rather than to actually feel the sting of death someday, and then be with Christ later, or afterward, at His Coming, at the Resurrection of the dead.

Paul is not advocating that to be absent from the body, is to be present with the Lord. Or that we are immortal…, or that anyone goes immediately to heaven upon an earthly death. That’s not what he’s saying. Remember, he- Paul, also wrote that God ALONE is immortal (1 Tim 6:16). So, that means we’re not. That means we die. It doesn’t get more explicit than that.

If Christ wouldn’t return one day to resurrect us from the dead- we’d be eternally lost into lifeless oblivion. For the simple reason- as Paul said, we don’t have inherent immortality. God ALONE is immortal. Therefore, to be absent from the body, doesn’t mean to be present with the Lord- at least not until the resurrection.

Think about that! That wouldn’t be the case if we automatically went to heaven consciously at death by way of immortality- but that’s not the case.

Once again, LISTEN CAREFULLY as Paul expounds this point:

Once again, we see that Christ is THE FIRST, of those WHO ARE asleep (dead), to have been resurrected and gone to heaven. And the rest of us, WILL NOT go to heaven until Christ returns for us AT HIS COMING- at the resurrection, AND NOT AT ANY OTHER TIME before that.

So, let’s not get confused about the misconception of to be absent from the body, is to be present with the Lord. Not so!

Other than Christ, no one has gone to heaven.

If Christ was the firstfruits, meaning first among mankind to be resurrected to heaven, then, that means that Enoch and Elijah, and Moses and the thief on the cross- none, went to heaven when they died. And to this day, are still dead and buried in their graves. They will be part of the first and blessed resurrection at Christ’s coming.