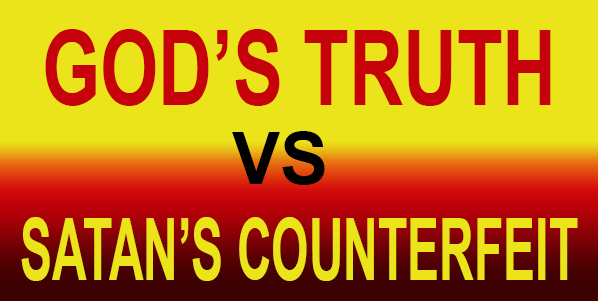 At the dawn of time, God’s Truth vs Satan’s Counterfeit, played out in the Garden of Eden.

From the very beginning, God gave us His Sabbath AS A SIGN between us and Him (Ezek 20:12). But, that’s not all He gave us at the time! God also gave us A SPECIFIC TRUTH from the onset, that, aside from the Sabbath, ALSO distinguishes those on the path of truth and righteousness, from those on the path of deception and error. Let’s focus on this particular truth by supplying some background.

At the twilight of mankind’s creation, a very powerful and impious entity, started brainstorming a set of counterfeit truths for the sole purpose of deceiving mankind throughout the centuries and making him stray from the ways of God. And thousands of years later, the bible now tells us that this irreverent spiritual being, deceives the whole world (Rev. 12:9).

In the Garden of Eden, Satan, scrupulously laid out his signature, counterfeit truth, which succeeded then and has succeeded tremendously ever since, being preached weekly on pulpits all over the world!

It has secured a dark place in the pages of time, and made its mark, as that of being the very first lie EVER recorded in biblical history! That one planted counterfeit alone, is responsible for dozens of related erroneous doctrinal sprouts that are embraced by those who hold on to this flagship counterfeit as being absolute truth!

On one particular day in the Garden of Eden, two “truths” were pitted against each other. One was the REAL truth, and the other, was a COUNTERFEIT “truth”. One is from God, the other is from Satan. And depending on which you’ve chosen to follow, you’re either embracing all of God’s truths as a whole, or all of Satan’s counterfeit truths as a whole.

Mankind, being represented by Adam and Eve, were given direct and precise instructions by God- and the specific consequences if they failed to follow through with obedience. Satan, contradicted God’s truth and offered them his own counterfeit truth which was far more enticing:

Gen 2:16 – But the LORD God warned him, “You may freely eat the fruit of every tree in the garden

Gen 2:17  —except the tree of the knowledge of good and evil. If you eat its fruit, YOU ARE SURE TO DIE.”

Gen 3:1 – The serpent was the shrewdest of all the wild animals the LORD God had made. One day he asked the woman, “Did God really say you must not eat the fruit from any of the trees in the garden?”

Gen 3:2 – “Of course we may eat fruit from the trees in the garden,” the woman replied.

Gen 3:3 – “It’s only the fruit from the tree in the middle of the garden that we are not allowed to eat. GOD SAID, ‘You must not eat it or even touch it; if you do, YOU WILL DIE.'”

So, after all this time, WHO have you believed, God or Satan? God’s Truth or Satan’s counterfeit? Which of these two doctrines does your church embrace and teach?

Anyone who thinks that there are people CONSCIOUS in heaven RIGHT NOW, or believe some are being tormented in hell right now, then believe that we really DON’T DIE… and that it is only our bodies that die and decay. They have embraced Satan’s signature, counterfeit truth that claims that We really Don’t Die because we are like God, immortal! Or that we have inherent immortality within us- which is also a lie!

And by being enticed to embrace this counterfeit truth, and compelled to look deeper into these succulent layers of deceit, they have also uncovered and exposed themselves to the rest of Satan’s underlying package of counterfeits such as: Sunday sacredness over Sabbath Holiness; that you can eat unclean animals in spite of God forbidding it; choosing man’s holidays over God’s Holy Days; Immediately going to heaven or hell in a conscious state when dying a worldly death vs. being dead and unconscious in the grave; embracing eternal torture vs. complete annihilation in the Lake of Fire; Once saved, always saved; Antinomianism; Love, grace or faith replacing God’s Eternal Law; and on and on and on…

So, wherever, and whenever, you come across ANYONE or ANY PLACE teaching the doctrine of the immortality of the soul in any way, shape, or form…, rest assured THAT YOU HAVE IDENTIFIED SATAN’S TRADEMARK AND SIGNATURE LIE, which, of course, IS A SURE SIGN that Satan’s BRAND OF “TRUTHS”, is the order of the day!

RUN FAR FROM THEM and don’t look back, NOT EVER!